Le’Veon Bell is arguably the best tailback in the NFL. He has all the skills any team could ever wish for. Patience like Emmitt, burst like LT, elusiveness like Barry, and power like Campbell. Hell, he even has hands like Larry Centers and better than a lot of receivers. So why have the Steelers and his financial team not come to a contract agreement?

Well, for starters he is a running back! The most likely skill position player to be injured. He has been a touch monster over his first 5 seasons averaging almost 20 carries, and 5 receptions a game, thus making himself a target more often than not. This has definitely been to his detriment as he has already sustained 2 major knee injuries, 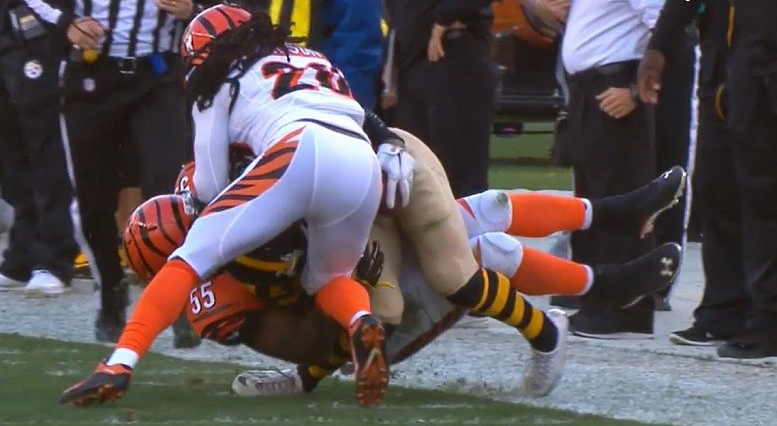 a groin injury, at least 1 known concussion and a lisfranc sprain. Not to mention the fact he has already been suspended by the NFL and subsequently in the drug program. Granted, the dude is a monster! Over those 62 games he has amassed an amazing 5300 yards and 35 tds on the ground, as well as a whopping 312 receptions, over 2600 yards and 7 tds receiving.

Numbers and injuries aside, paying a running back on a long term contract just isn’t a smart financial decision.

Even as good as the back is, there is almost none that are valuable enough to lock up, especially with guaranteed money after their first contract. Add in those previously stated touch numbers along side the multitude of sustained injuries and Le’Veon should be counting his graces for being franchised at his number of 14.5 mil. Turning down 5 years for 60 mil last year and now 70 over 5 this year probably was not the best move for him. It is his money and he has every right to demand as much as he wants but he also has to look through the eyes of the business.

I understand that the NFL, the players, and the whole operation are obviously in a different stratosphere then our measly 5 days a week, 40 hour jobs. However, similar to our peasant jobs we are paid to perform a job duty. There is no guarantee of a paycheck just because I woke up that day. Yeah, yeah, I’ve already heard it. “You’re not putting your body at risk, you’re not playing a sport that millions watch.” No, I’m just part of a crew and store operation which stocks shelves full of fresh produce, meat, canned goods, and your daily coffee. My body is at risk everyday by the way. I have to, (like many) drive to work, work in multiple temperatures on a daily basis. Have to wear slip resistant shoes, I mean if I didn’t I ‘d probably eat shit a million times at work and break my tailbone, wrist, forearm, or even bump my head and receive a concussion or laceration.

Long story short, I could go on and on about why Le’veon, and many of the NFL players who are bitching about their contracts, and how they’re treated should SHUT THE F@CK UP!

I apologize if I’m not sympathetic to your minuscule, non-guaranteed, multi million dollar contracts. I’m sorry that you have to actually go to work in order to EARN your game check just like the fans. A game check that is more than most families earn in a year, even a lifetime. A GAME check that exceeds that of many surgeons, paramedics, police officers, military personal, etc, etc, and most if not least important that of the teachers who are trying to shape our youth for our society. Go ahead! Hold out! I dare you! Put up or shut up!

View all posts by everydayfanstake